I know – I’ve been talking about this for AGES – ever since Alice-Miranda was first optioned by SLR Productions, 4 years ago. Then in 2016 they announced the project was in development (but that still doesn’t mean it will get made because you need the GREEN LIGHT.) Well, I am thrilled that we have the GREEN LIGHT and the official word is below the picture. I am so excited that Alice-Miranda and on her friends will be coming to a television screen near you. It’s not a series – but rather a movie and it will be animated – so a cartoon. I like that as it means we can use the images of Alice-Miranda and her friends that have become so much a part of who she is. I don’t have any more details at this stage but I will post things as news becomes available. In the meantime, just know that IT’S HAPPENING and I’m more than a little bit excited!! 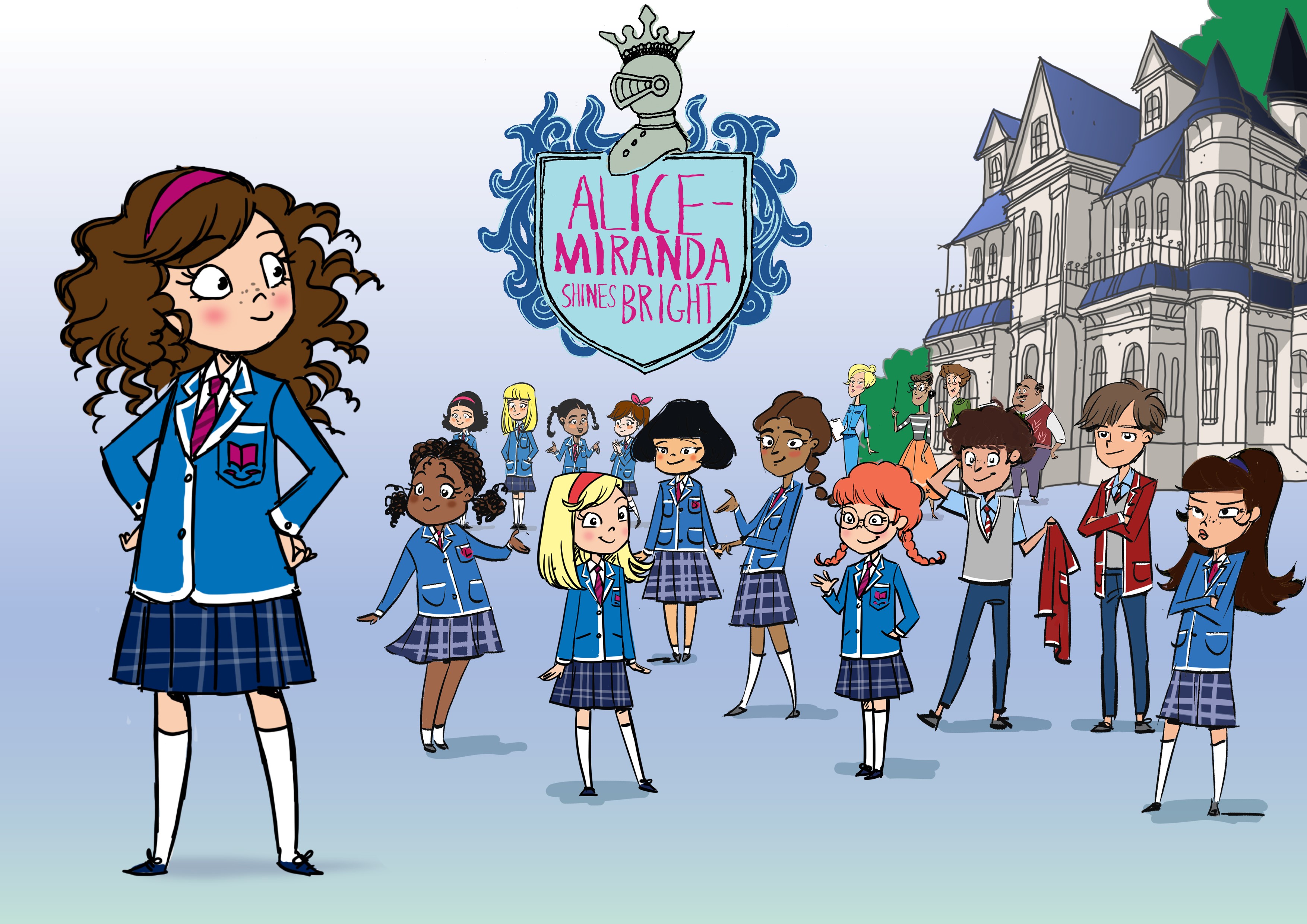 The animated telemovie, targeted to the six to nine year old audience, will premiere locally on the Nine Network and will be distributed internationally by ZDF Enterprises.

The 17 part book series (and counting) has been an extraordinary success with sales exceeding 850,000 copies in Australia and 1 million in key international territories such as UK, North America, Germany, Brazil, Hungary, Turkey and Indonesia.

Alice-Miranda Shines Bright is a story that contains a world of adventures including a treasure trove of mysteries to be solved; a series of impossible tests to be passed; secret midnight feasts to be had; pony rides through mysterious woodlands; a school play to open and, to top it off, a great big double wedding to pull off!

The telemovie begins when Alice-Miranda who is about to become the youngest girl to ever attend the Winchesterfield-Downsfordvale Academy, a place where she will encounter not only friendship and fun, but also high drama, mystery and intrigue.  There’s teachers and students in urgent need of help; a girl determined to be Alice-Miranda and her friends’ arch enemy; Fayle School for Boys under threat; a frightening principal who hasn’t been seen for ten years and not to mention a scary witch in the woods.

Alice-Miranda is an extraordinary young girl determined to never give up, even when she’s faced with challenges that seem impossible to overcome, her bravery, kindness and positive nature sees her triumph against all odds.

“I am thrilled to bring this perpetually positive and beloved young heroine Alice-Miranda to the screen with esteemed partners, Screen Australia, Nine Network and ZDF Enterprises. It’s an honour to work with Jacqueline Harvey the author of this incredible publishing property and to know that Alice-Miranda’s loyal and dedicated audiences will soon be sharing in her awesome adventures on screen,” said SLR Productions’ CEO and Executive Producer, Suzanne Ryan.

“SLR Productions all-female creative team including CEO and Executive Producer Suzanne Ryan, Script Editor Melanie Alexander and Director Jo Boag have crafted a smart and inquisitive protagonist in Alice-Miranda that young girls can look up to,” said Sally Caplan, Head of Content at Screen Australia. “Based off the success of the bestselling books, we’re excited to see this Emmy Award winning team bring this fantastical and inclusive story to screen as an animated adaptation.”

“Alice-Miranda is a great role model for our audience and we are delighted to be working on this exceptional project with the team at SLR Productions. We know that Alice-Miranda has a great following with young readers and Jacqueline Harvey is one of Australia’s top female children’s authors.  We believe all the right ingredients are in place for this dynamic, quality Australian children’s drama to be a huge success on Nine,” said Nine Network Co-Head of Drama, Jo Rooney.

“We are thrilled to be working with our long-time partner, Suzanne Ryan and her team at SLR Productions on this animated adaptation of the Alice-Miranda book series by Jacqueline Harvey.  The books are loved by millions of young girls all over the world and we are sure they will enjoy the telemovie, Alice-Miranda Shines Bright just as much,” said Arne Lohmann, VP ZDFE.junior at ZDF Enterprises.

SLR Productions is one of Australia’s leading Emmy® and multi award-winning children’s entertainment companies, specialising in the creation, development and production of world-class media content. SLR Productions is the media company behind brands such as Guess How Much I Love You; The Skinner Boys – Guardians of the Lost Secrets: Lexi & Lottie: Trusty Twin Detectives, Captain Flinn and The Pirate Dinosaurs, Sam Fox: Extreme Adventures, and I Got a Rocket. SLR’s passion is to make creative, adventurous, imaginative and exciting programmes for audiences worldwide. Established in 2002 by Founder & CEO, Suzanne Ryan, SLR Productions has produced more than 180 hours of content sold in more than 165 countries throughout the world. With its highly experienced development and production divisions, SLR partners with major broadcasters, producers, distributors, publishers and creative both locally and internationally to create hit shows with a truly global reach. www.slrproductions.com

ZDF Enterprises was founded in 1993 as a commercial subsidiary of ZDF, one of the largest and most renowned TV broadcasters in Europe. Headquartered in Mainz, Germany, ZDF Enterprises is responsible for the worldwide sale of programs, the making of international coproductions, the acquisition of licenses as well as the merchandising of strong program brands in its own name, for the ZDF, and for third parties. ZDF Enterprises has successfully established itself as an independent market player on the German and international stage. Bound into a strong group, the company manages the largest German-language stock of programs in the world and, next to this, a continuously growing portfolio of international productions consisting of series and miniseries, TV movies, documentaries and children’s programs. In the course of the development and diversification process carried out up to now, many business fields in the television and media domains were made accessible in the ZDF Enterprises group. Thus ZDF Enterprises can provide a comprehensive, full-service offering today, and covers every step in the chain of origin and exploitation of successful TV programs, from development to production and up to the marketing of TV licenses, merchandising rights, online rights and much more.