I love encouraging children to write their own stories and today I’m thrilled to post some fantastic work from two talented young students at St Hilda’s School which is in a gorgeous little village just north of London. I visited St Hilda’s in January (for my Aussie and New Zealand readers, the English students only have a couple of weeks holiday over Christmas as it’s the middle of Winter in the Northern Hemisphere) hence while you’re all soaking up the sun and hitting the beach, they’re shivering in the cold! Anyway, I think cold weather is perfect for writing and after my visit to St Hilda’s, the school conducted a competition where the students wrote their own Clementine Rose or Alice-Miranda themed stories. I promised that I would post the winning entries on the blog (and I do apologise that it has taken me such a long time – I have been snowed under working on two books). But finally, here they are. Congratulations to Arianna Winward in Year 3 and Saba Hashemian in F6. Well done girls – it’s wonderful that you have written your own adventures with such elaborate descriptions.  Poor Clemmie with that nasty bully and Alice-Miranda and the ghost – I can’t imagine what’s about to happen next!

I’m looking forward to visiting England again later in the year and it will be lovely to see Arianna and Saba and congratulate them in person. 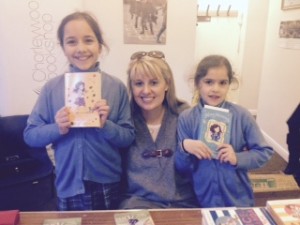 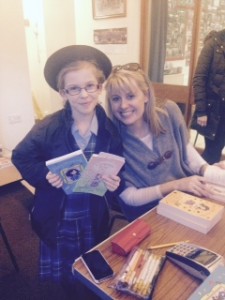 One sunny morning, Clementine awoke with a start and said to herself “Monday is the very last day and I might get the lead part in the play.”  Clementine opened the long thin golden curtains so she did not have to switch on the lights to see her friend Poppy.  Poppy had ginger hair tied into two plaits and had eyes as blue as the sea.  Her voice was nice and clear and with her uniform as well, she looked stunning!  Clementine was in Junior School and she looked down on the younger ones as if they were babies.  Clemmie quickly put on her uniform so she was wearing exactly the same clothes as Poppy and hand in hand both of the children went to their classroom.

When Clementine was in kindergarten there was a bad boy called Angus sitting next to her and joked that she had a pet pig to everyone (she actually did have a pig called Lavender but eventually learned to go to school without her).  This time her bully was called Katie and she had a gang with her as well.  They went to the classroom and straight away their teacher said, “Go to the drama room right now please!”  Clemmie was puzzled and so was Poppy but they went anyway.  When they got there, the drama teacher, Mrs Simpson, said that our play is going to be called Cinderella and everyone gasped in amazement.  Katie let out a squeal of delight and said, “Please oh please can I have the beautiful Cinderella’s part?!” in her loudest voice ever.  However, actually she chose Clementine for the part and she was as joyful as a jester from then on!  Everyone got on with Cinderella’s dress and the other clothes.  When all of that was going on Katie complained and complained to Mrs Simpson.  Mrs Simpson was starting to get a little bit annoyed with her.  In the end Katie got so jealous with Clementine she stomped in front of her and said in a very very loud voice, “YOU HORRIBLE LITTLE BEAST,” and tripped Clemmie up so her knee bled so much that it did not stop even when they put a plaster on.  So she had to go in an ambulance to the hospital!  Katie laughed like a horrid witch but to her great disappointment Clemmie came back in time for the show and everybody was astonished, because they thought she would never come back.  “Clemieeeeee, you came back just in time for the show!” shouted Poppy.  “I missed you as well”, added Poppy.  The show went well, Clementine’s and Poppy’s parents came to watch and they were amazed!

Gazing out of her classroom window, Alice-Miranda Highton-Smith-Kennington-Jones had just started her second term at Winchester-Downsfordvale Academy for Proper Young Ladies.  Alice-Miranda watched the rain pelt down as the frost-glittered leaves were whipped up by the biting wind that howled as if in agony.  Even her freckles seemed to shrivel at the sight and her rosy cheeks were now as pale as a ghost.  Black silhouettes of skeleton trees stood out sharply against the winter sky, like intricate black lace as Alice-Miranda watched the dying light of the sun become extinguished by the black threat of an oncoming storm.  Impenetrable darkness rolled down the street like a never-ending blanket but Alice-Miranda was one of those girls who always looked on the bright side and instead of being scared admired the headlights of cars winking at her, the buses that slowly dwindled away into the distance and the lamp-posts that flickered like candles.

Her teacher, Mrs Cassy Belvedor was a cascade of enthusiastic hands and gestures, as she always was when she found interest in something.  Sweeping past in a torrent of passion, Alice-Miranda smelt her cheap perfume every time.  “Legend has it that in this very school in the attic, a ghost haunts the very passages, known as Lady Ashcroft,” explained Mrs Belvedor, spitting with enthusiasm and immersed with interest.  Alice-Miranda’s eyes lit up with intrigue and curiosity.  Thoughts whirred in her head. That’s it…she would do it that night.  She had made up her mind, she would search for the ghost in the attic!  Surely it wasn’t true, or was it?  How could anything go wrong? These were the thoughts that overwhelmed her mind.  This was the inquisitive Alice-Miranda after all… What harm could it cause?

The school attic had always been abandoned and was out of bounds as strange happenings and sightings had gone on there over the years.  Alice-Miranda was the loveliest, most polite girl, but she felt like she couldn’t resist the temptation of searching for the ghost, like a mysterious force was urging her to do it.  She gulped and swallowed hard.  Without thinking, she crept up the winding banister towards the attic.  Cobwebs lingered and had lived in corners for years, as Alice-Miranda gazed at the attic eaves, like watching black eyes which made her feel like she was about to step wide awake into one of her novels.  Suddenly, an eerie silence haunted and walked the corridors, gripping her with fear.  It was cold.  It was dark.  She was alone.  The floorboards creaked like an old lady’s bones at midnight as she stood in the corridor trembling, feeling like she was being swallowed up by the impenetrable darkness.  An icy hand clutched her heart as an unwelcoming shiver rolled down her spine.

Hardly daring to breathe, Alice-Miranda quivered down the hallway, each footstep sounding explosive as there was a sudden change in the air.  She watched her life flash before her eyes and thoughts that she had come to the end seized her body…this was the thought which haunted her the most.  Suddenly, a door swung open and a blast of air rushed through the doorway. Standing like a paralysed statue in the moonlit doorway, a blood-curdling scream pierced the air… had she really come to the end of her journey?