Clementine Rose has to say goodbye. Her friends, Sophie and Jules, are moving back to France. While she is sad to see them go, Sophie has promised they will come back. Plus, Clementine will now have an overseas pen pal!

At school and home, things are also changing. There’s a new girl in Clementine’s class who looks set to cause trouble. And at Penberthy House, Drew and Will have become such frequent visitors that Clementine begins to wonder whether a very special promise is about to be made.

Clementine Rose and the Birthday Emergency

Clementine Rose and the Special Promise

Young female readers will be delighted to know that the adventures of Clementine Rose, the sassy young girl who was delivered not in the usual way at a hospital but in the back of a mini-van in a basket of dinner rolls, continue in these two new episodes.  Living in the magnificent mansion in Penberthy Floss with her mother, her Aunt Violet, Digby Pertwhistle the butler and pet teacup pig, Lavender, Clementine Rose has had many adventures that her readers can really relate to, making her a favourite with newly independent readers.

This time, in The Birthday Emergency, she is counting the days to her birthday but before that she has to participate in the sports carnival and with Lavender not her usual self, there’s no guarantee her party will go ahead as planned.  And many changes are afoot in The Special Promise as she deals with specials friends leaving and suspicious new ones arriving.

When I first introduced this series in 2012 to Miss 6, she was entranced and could not wait for the next episode. Even though she is now Miss 9, she still enjoys them and is reading them to Miss Nearly 5 who is already a fan.  Jacqueline Harvey has certainly created a character who resonates with her readers and I know there will be a whole new group of students wanting to make her acquaintance when I promote this series in the new school year. As my friend Sue Warren says on her Just So Stories blog, https://losangzopa.wordpress.com, “Jacqueline Harvey continually strikes just the right note with her books for younger girls. The mix of adventure, mischief, humour and excitement has great appeal for the intended age group and each book contains much with which these readers can easily identify – even though they don’t live in a big old house or own a teacup pig!” Exactly what I would have said (and have, in previous reviews.)

I cannot wait to share the next installment of Kensy and Max with readers! There's so much action and adventure going on in this story - and it's mostly set in the wilds of New Zealand. There's a huge... END_OF_DOCUMENT_TOKEN_TO_BE_REPLACED 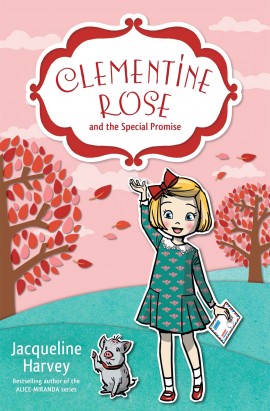