My Nana, Edna Jones grew up not far from Byron Bay. She and her sisters spent their childhoods in Rosebank and The Channon. Their summer holidays involved camping by the beach at Byron – although back then there was a whaling station, so swimming was a bit more perilous than it is today. One of her sisters still lived at Broken Head right up until she died in the early 2000s and one of my favourite days out with Nana and Grandad involved visiting her old primary schools and finding photographs of her and her sisters in the school records.

In 1999, I took Long Service Leave from my much-loved job at a school in the Southern Highlands and with my husband Ian, we rented an apartment on Broken Head Road, right next door to the Byron Bay Golf Club. Surprisingly I had a great knack of winning the meat trays on Friday nights and I did learn to play golf (and loved it). Initially we had planned to stay for three months but that turned into six and then we ended up buying a place. We were hooked. Byron Bay is beautiful and inspiring and there is a wonderful laid back atmosphere. It was while I was living in Byron that I decided to really give writing a proper go. I wrote my first junior fiction series while we were there and also my picture book, The Sound of the Sea. It came to me one afternoon when we’d been fishing on South Golden Beach – on the most perfect of days. Of course nothing in publishing happens quickly, so while I wrote the books when we lived there they weren’t published until after we’d moved back to Sydney.

Sadly Byron wasn’t to be for the long term. Although I did a lot of casual teaching in schools in the area, at St Finbarr’s, Holy Family, St John’s and St Carthage’s, I was restless and felt like my teaching career hadn’t quite reached the place I wanted it to be. So we headed back to Sydney where I took a six month job that turned into eleven years and a half years.

I am thrilled to be heading back to Byron Bay in a couple of weeks time for the Writers’ Festival. I’ll be appearing with Jackie French on the School Days Program at Mullumbimby and Maclean and on Friday afternoon I’m excited to be hosting an event at the Byron Bay Library with Room to Read, for which I am an author ambassador.

On Sunday I’ll be at the Kids Day Out with a fabulous lineup of children’s authors including Samantha Turnbull, Jackie French, Dave Hartley and Scott Prince and Andy Griffiths and Terry Denton.

I hope to see you somewhere at the festival but if you want to come along to the library on Friday afternoon where you can ask me loads of questions, have your books signed, listen to some readings and I’ll tell lots of funny stories, you can find all the details on the flyer below and book on the link here Meet Jacqueline Harvey at Byron Bay Library. 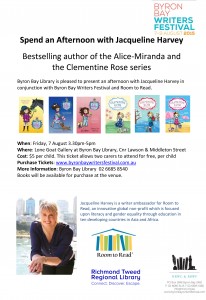