I’m thrilled to report, after lots of preparation and, yes, I admit, hordes of butterflies, which at the time seemed to be behaving more like elephants in my stomach, we have run (and won – we even got trophies!) the Dymocks Great Debate for 2017. Despite my nerves I really loved it and felt very pleased that I had risen to the challenge (having not debated since I was in high school!) I was lucky to be teamed up with Jordan Raskopoulos, who was incredibly clever and funny and our team captain, Adam Spencer – yes, the numbers guy who is so smart and hilarious too. It helped that we were on the right side of the debate because, as you all know, it is far better to be part of a team than going it alone! 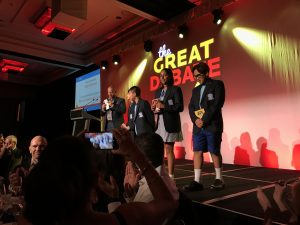 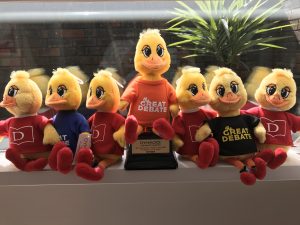 It was wonderful to have the support of a whole table of Penguin Random House people cheering us on – yes it’s definitely better to be a team player than to go it alone!

The greatest success though, was for the Dymocks Children’s Charities, which raised over $300,000 as a result of the generosity of the guests who came along on the night. This money will go towards providing books to under privileged children in our community. It’s hard to imagine but there are children all over our great country who do not own a book of their own.

Most of you will know that I am an Ambassador for the Dymocks Children’s Charities, which aims to provide high-quality books to primary school aged children in priority locations. The vision is to change kids’ lives – one book at a time!

Ensuring all children reach an appropriate level of literacy remains one of Australia’s major challenges. Literacy is not just about reading, it is the foundation for learning. Dymocks Children’s Charities has developed unique literacy support programs that encourage children to cultivate a love for books and read every day ‘just because they want to’. Quite simply, it’s about getting great books into kids’ hands!

The evening was a resounding success. I had so much fun and it was an absolute honour to be part of such a great event.