I can’t believe it’s June already.  Last time I looked it was February – where did those months go!  It’s only when I check back over my calendar I realise that the weeks have sped by because I’ve been pretty busy.  This week I finished the edit for Alice-Miranda At Camp and am looking forward to receiving the page proofs next week.  I’m also ‘this close’ to finishing Clementine Rose number 8 (with a working title of Clementine Rose and the Ballet Break In, but it may change yet).  Over the past couple of months I’ve read and given feedback on the first two scripts for the Alice-Miranda television series – which I think is going to be fantastic and toured for a week in South Australia as well as attending events for the Sydney Writers’ Festival and Abbotsleigh Literary Festival.  There are the usual kazillion emails and blog posts and all the other things that writers do these days too.  Kate Forsyth wrote a very eloquent blog post about just that for Random House this week.

The past few days I haven’t achieved as much as I’d have liked to, but sometimes distraction and procrastination are the name of the game.  I guess there are days when you just don’t feel as if you’re on top of things the way you’d like to.

Last night I attended a special farewell to Barbara and Tony Horgan, the inspirational couple who owned Shearer’s Bookshop at Leichhardt via Gordon.  They are two of the most wonderfully generous and kind people I’ve ever met and they’ve certainly had a big impact on my writing career.  It was testimony to how well loved they are, the sheer number of people who came to say goodbye.  They are off to Perth to be closer to family and although they won’t have a shop anymore, Barbara is going to have a blog and it sounds as if Tony already has offers of things book related to keep him busy.  I was one of the lucky last authors to have their name put up on the Author’s Wall in their beautiful shop.  I remember at the time feeling like, ‘wow, I’m on the Shearer’s Wall – I’ve arrived!’  Sadly it was torn down not long afterwards but it’s still one of my favourite memories of this whole writing journey.  I’m excited that I’ll get to see them in August when I tour in Perth for a week.

So where to next?  It’s less than a month until we launch Clementine Rose and the Treasure Box and I’m really thrilled to be doing lots of events to celebrate.  All of them are listed on my events page but sometimes it’s easier to see it in one place, so I’ve listed them below as well.  I’ve got a writers’ workshop coming up for children in Years 5-8 and the Children’s and YA Festival at the NSW Writers’ Centre which will be fantastic.  Thanks everyone too for all the support on the new website – it’s been so encouraging to have loads of people signing up for the newsletter and writing comments on the blog.  And if you haven’t signed up for the newsletter yet, please do.

I’m looking forward to meeting lots of readers in person over the coming months and hope to see you somewhere soon.

Thursday 3 July A series of three high teas in Newcastle

I’d better stop blogging now and get on with that book.  Alice-Miranda At the Palace beckons (according to my schedule I should have started it last Tuesday!). 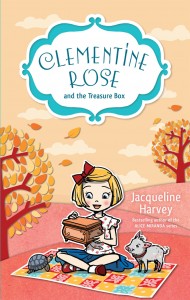