At the end of September on a cool and grey morning, Ian, Olivia, Georgia and I set off to the city on the train to walk in the Family Fun Run as part of the Blackmores Sydney Running Festival. We were in a team called the Running Ducks and our team mascot is Dymock the Duck. Now you might wonder what that’s all about, but Dymock is actually the mascot for the Dymocks Children’s Charities, an organisation which raises money and does amazing things to provide books for children and schools in need. I’ve been one of the charity ambassadors for a couple of years now and I love it! There is nothing better than seeing children reading and when they receive a book (perhaps the first one they’ve ever owned) well, that’s really special. 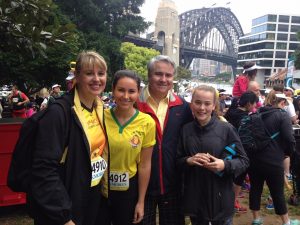 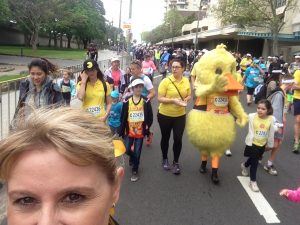 It’s a great event – and pretty special as the Harbour Bridge is closed to traffic and thousands of people walk and run over it. You get a great view of the city, even on an overcast day – and you finish up right near the Opera House steps and then into the Botanic Gardens. Perhaps next year you’d like to join us. It would be great to have a lot of little ducklings walking (yes we walk – I fear that poor Dymock would run out of puff if he had to run, so fast waddling is the name of the game). We also hand out stickers and kids love having their pictures taken with Dymock. 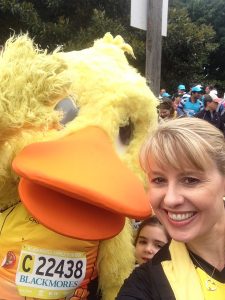 If you’d like to know more about the work of the Dymocks Children’s Charities you can just click here.

Hope to see you on the Harbour Bridge with the team in 2017.