Whilst, we were in Singapore, I was delighted and humbled to receive news that Alice-Miranda at Camp had received the Honour Book Award in the Fiction for Younger Readers Category of the KOALA Awards. Here is a link to our acceptance speech – filmed on top of the hotel!

Did you know that every year, young readers from all over New South Wales judge their very own children’s book awards? The KOALA awards acknowledge the books which have most inspired, amused, terrified, enlightened and engaged the readers. Thank you to all who voted and congratulations to the other deserving recipients. Perhaps you can ask your school librarian if your school can participate in the awards in 2017!

Honour – The Stone Lion by Margaret Wild and Ritva Voutila

Honour – You Choose: Alien invaders from beyond the stars by George Ivanoff 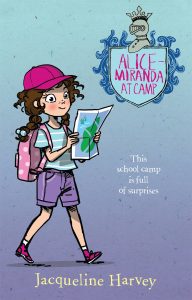 Winner – The 65-Storey Treehouse by Andy Griffiths and Terry Denton

Honour – Ugly: A beaut story about one very ugly kid by Robert Hoge

Honour – Weirdo 5: Totally Weird! by Anh Do and Jules Faber

Honour – My Life as an Alphabet by Barry Jonsberg