At the moment I’m on tour in the United Kingdom. Since arriving almost two weeks ago we’ve visited 11 schools and spoken to lots of children. But we had today off – partly out of necessity as we drove from Hertfordshire to Manchester for school visits tomorrow and partly because I’ve been to England lots of times and had never visited the amazing Roald Dahl museum in Great Missenden. 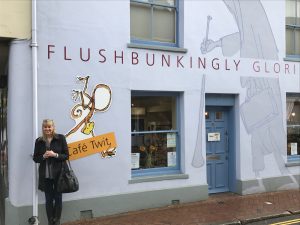 The village itself is gorgeous – quintessentially English with it’s narrow, windy streets and houses right on the footpath. Some of the front doors were so low, I couldn’t imagine how many visitors had hit their heads on the way in or out! 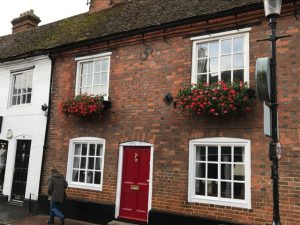 The museum is full of Dahl memorabilia, but my favourite thing by far was his writing shed. Roald Dahl had a shed at the bottom of the garden where he used to go to write each day. It was an unconventional space to say the least, as he wrote sitting in an old armchair with a desk like affair that he fashioned for himself covering the arms. It in turn was covered in green felt like a billiard table as he said the colour was easy on his eyes. He had a clothes brush to dust it off every morning before he started work – he liked to work for 4 hours at a time. There was a low table with all manner of curiosities including the ball from his very own hip which had to be removed and bone shavings from his spine after an operation (ick! I don’t know if I’d find my body parts inspiring for writing but obviously he did!). 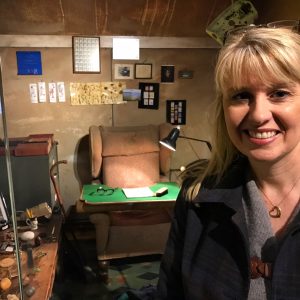 The room was moved piece by piece, from the linoleum on the floor to the sleeping bag he used to put his legs into. He also had a rather dangerous radiator set up above his head. There is a replica of the chair that you can try for yourself. I’m not sure that I would find this comfortable for hours on end, but it certainly worked for Mr Dahl! 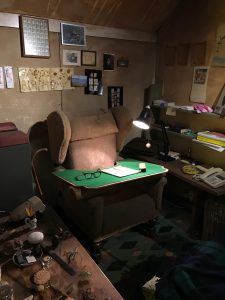 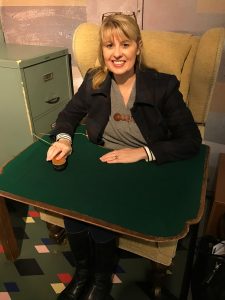 The museum shop is a veritable treasure trove and I couldn’t help myself, buying all manner of things Dahl.

If you ever get the chance to go to England, you simply must visit Great Missenden and the Roald Dahl Museum. I loved it!