I have just had one of the best professional weeks of my life. Being a part of the Sydney Writers’ Festival Primary School Days Program has been on my wish list ever since my first book was published (heavens knows why, as I seriously wouldn’t have been ready for it at all back then). But last week that dream came true. I pinched myself to think that I was in the same line up as Leigh Hobbs, Anthony Horowitz and Andy Griffiths – all absolute superstars and genuinely lovely people too. Lenny Ann Low hosted Monday’s proceedings at the Riverside Theatre in Parramatta, putting me very much at ease on the first day while Tristan Bancks took over on Tuesday for the rest of the week, both of them doing a great job of revving up the audience and keeping us all to time. I was second on the program, after Andy – who was fabulous and had the kids in hysterics. Following my time on stage, we then had book signings – which were amazing. Those lines seemed never ending and it was great to have time to talk to the kids and ask them what they liked about the morning. Anthony and Leigh followed on in the afternoon session. 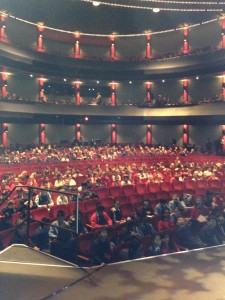 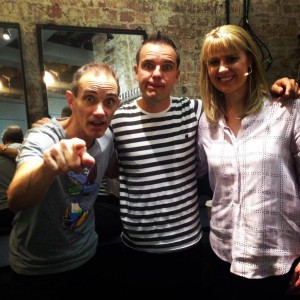 Andy Griffiths, Tristan Bancks and yours truly backstage at the Roslyn Packer Theatre at Walsh Bay 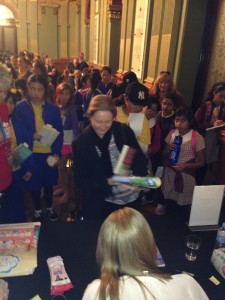 One of the neverending signing queues

Tuesday night’s Sydney Writers’ Festival opening party at the Wharf was lots of fun, spotting literary superstars and chatting to a few too. 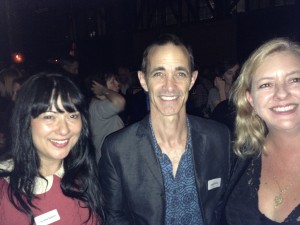 Serena Geddes, Andy Griffiths and Belinda Murrell at the opening party for the Sydney Writers’ Festival 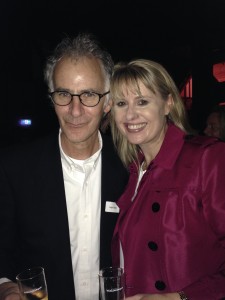 The School Days Program covered various venues during the week, starting at the Riverside Theatre Parramatta, followed by two days at the Roslyn Packer Theatre at the Wharf, then the Sydney Town Hall on Thursday and finally Dame Joan Sutherland Theatre at Penrith on Friday. Thursday was our biggest day with 1800 students in attendance while the other days varied between about 650 and 850.  I loved every minute. It was such a buzz getting out on stage in front of all those kids and making them laugh and cringe.  Seeing children so enthusiastic about books and stories makes my heart soar and talking to so many of them afterward was great fun too. 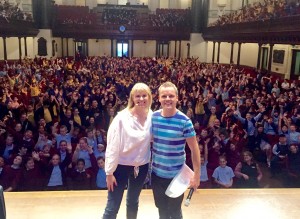 Just after my talk at the Sydney Town Hall with Tristan Bancks and 1800 students!

On Thursday night I got to frock up for the Australian Book Industry Awards (the ABIAs). I was so thrilled to be there for the third year in a row and this year to have two books in two different categories was a huge honour. I was in exalted company alongside people I have admired for many years, Andy Griffiths, Leigh Hobbs, Alison Lester and Graeme Base in the 0-8 years category for Clementine Rose and the Seaside Escape and RA Spratt, Morris Gleitzman, Garth Nix, John Flanagan and Judith Rossell in the 8-14 years category for Alice-Miranda in Japan. Everyone looked gorgeous as they arrived on the red carpet at Doltone House, Pyrmont. It’s the night of nights for books in Australia and in the past couple of years it has become very glamorous. This year the theme was ‘a touch of ruby sparkle’. I wore a black dress with ruby sparkles on my nails. 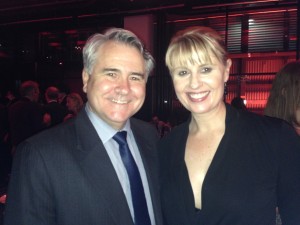 With my handsome husband Ian Harvey at the ABIAs 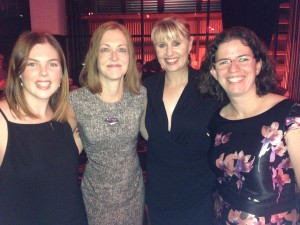 Our categories were announced early – which is a relief, because then you can just go on and enjoy the evening. We all knew Andy Griffiths would win in the first category (and he rightfully did) and then, the lovely Judith Rossell took out the prize in the second, for her beautiful book, Withering By Sea. Naturally I felt a momentary twinge of disappointment but was very happy for Andy and Judith and as the only author with the honour of having two different books shortlisted this year, I was thrilled, no matter what the outcome.

When it came to the BIG award of the night, the Australian Book of the Year, I was absolutely ecstatic to see Andy take out the prize for the 52 Storey Treehouse – the first ever children’s book to receive this accolade. He has done so much to raise the profile of children’s books in Australia and get kids reading. He sold more books than any other author in the country last year, which is an incredible feat and he deserved to win, hands down. 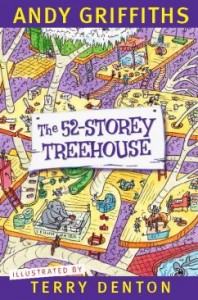 Sometimes as a children’s author we don’t get taken quite as seriously as those who write for the grown ups, but I can’t imagine why. I bet the adults reading this can still remember books that had a huge influence on them as children.  I know I certainly do. I remember those stories with such fondness because they ignited a passion for reading – they took me on great adventures and allowed me – an ordinary kid growing up in a small town, to find out about the world, to take on the baddies, to be someone else – at least for a short time. Being a children’s author is such a privilege and I can’t imagine having a better job (although teaching came a close second – well the creative bits that I loved, not so much the bureaucracy that has taken over so much of a teachers’ day and impinged on their time and ability to deliver the most creative lessons). 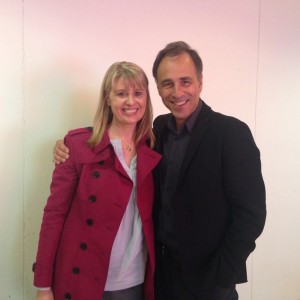 With Anthony Horowitz, hugely talented and bestselling author of the Alex Rider series among may others

The week wound up with a party for the Penguin Random House authors at Pier One where I met loads of interesting people and then on Saturday my husband and I decided to head back in, just to soak up the atmosphere and see if we could get some tickets for other events. I was really hoping to see David Walliams and we did!  He was fabulous and I loved every minute. Hamish Blake interviewed him and proved to be just as quick and funny as he is on the radio and television. David was warm and generous and the only thing that could have made my week any better would have been meeting him in person.  Never mind – it was not to be. He does follow me on Twitter, so for the moment I will have to be satisfied with that and hope that next time I’m in the UK perhaps I’ll meet him there. 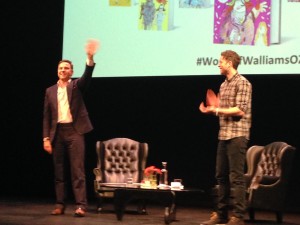 Thank you to everyone who made this week so amazing.  Jeanmarie Morrison, who is in charge of the Children’s events for the SWF was everywhere, supporting us and making sure that things were going to plan, all of the stage crews and staff at the venues – particularly Claire, Victoria, MJ, Jason and Erroll, Ben, Tim and Farley – you were all fantastic, and the volunteers, especially Monica at Parramatta, Meg and Adeline at the Wharf and again at the Town Hall and Sarah at Penrith – you were so fabulous! Festival Director, Jemma Birrell has taken the festival from strength to strength and on top of that she’s an absolute sweetheart too.  And of course lovely Sarana from Random House who looked after me (and fed me!) and the other publicists, Charlotte, Stephanie and I’ve forgotten the name of Leigh Hobbs’ publicist from Allen and Unwin (sorry). It was pleasure meeting you all. Tristan and Lenny Ann – thanks for a great week and Andy, Leigh and Anthony – I loved you all before and adore you even more now!

I hope that one day I get to do it all again but in the meantime it will take a while to come down from the high that has been the Sydney Writers’ Festival 2015. 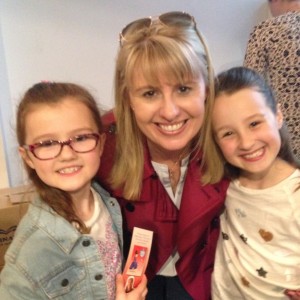 Met these two gorgeous fans at the David Walliams event!